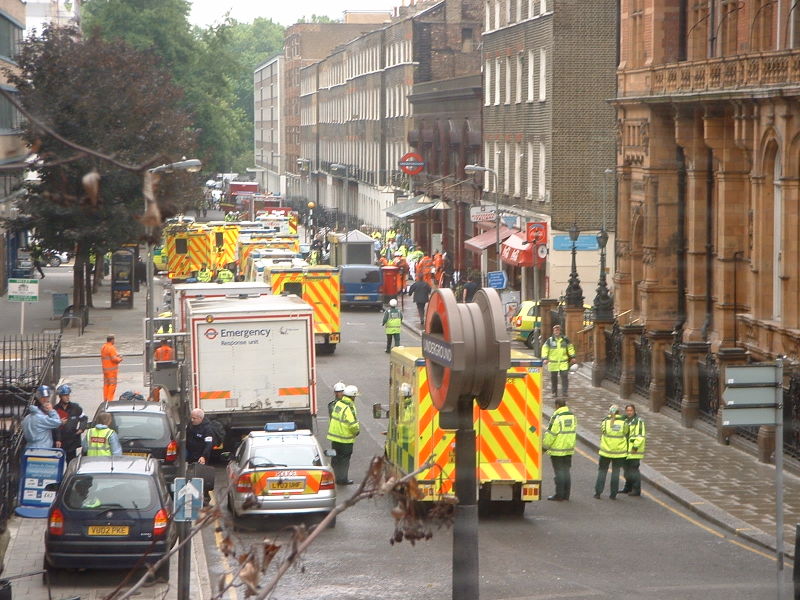 Being short and late might have saved Holly Richardson's life.

The Charlotte high school grad has lived and worked in London for two years. Every weekday morning she catches the Piccadilly line of what Londoners call the Tube. She likes to get a spot in the first carriage, which lets out closer to her office.

She was running late Thursday and had to cram into the second car instead. She's only 5-feet-2 and 105 pounds, but could barely squeeze inside.

In the car where she usually rode, terrorists had left a bomb. London police say it was probably in a backpack on the floor of the carriage, by the first set of double doors -- 20 feet away from Richardson in the second car.

The bomb exploded between King's Cross station and Russell Square.

The blast filled Richardson's car with smoke, screams and shrapnel, but she's small enough that other people blocked the flying debris. Nothing hit her.

One London newspaper said Richardson's train suffered the "worst confirmed carnage" in Thursday's attacks. About 900 people were crowded onto the Piccadilly line when the bomb exploded about 8:50 a.m.

It killed at least 21 -- most of them in that first carriage.

Kilkka says her daughter is still in shock and hasn't told her everything that happened in the No. 2 car. The passengers were trapped -- doors and windows wouldn't open. Richardson tried to calm two girls who were "freaking out," her mother said.

When rescuers finally reached them 15 minutes later, according to media reports, the passengers had to walk 200 yards through a dark, smoke-filled tunnel back to the platform at King's Cross.

Kilkka says her daughter refused to look to either side. She stared straight ahead as they walked, so she wouldn't see the bodies of the dead and injured.

"She said it was long and dark, and you couldn't breathe," Kilkka said, "and there was panic, and there was screaming."

Rescuers led the passengers to a double-decker bus, to take them to the hospital. Kilkka says her daughter didn't want to get on. Richardson wandered off, not really knowing where she was or what she was doing, until she walked into a Starbucks.

The customers stared at her black, soot-covered face and clothes. A stranger, realizing she'd been in the bombings, walked her to the hospital.

It was too horrible there, she later told her mother. She didn't want to go in. The doctors checked her and told her she needed to come back this week so they could make sure the soot and smoke hadn't damaged her lungs.

They washed her hands and face. Her clothes still blackened, she walked halfway across London to her gym club, showered there and called her mother in Charlotte, who had just learned about the bombing.

"I just hit the ground and praised the Lord when I heard her voice," Kilkka said.

Only a handful of U.S. residents were injured in the London attacks, a State Department spokeswoman said Monday. Two sisters from Knoxville, Tenn., both college students, returned to the country Sunday for treatment at Duke University Medical Center in Durham.

Richardson, 26, works in the marketing department at a financial firm in London. She graduated from UNC Chapel Hill in 2001 with a journalism degree, and from Providence High in 1997. She was a cheerleader, captain of the dance team and editor on the high school yearbook staff, her mother said.

Richardson minored in German in college and has lived abroad for most of the time since she graduated. Last fall, Kilkka and her mother went to visit Richardson in London - three generations of the family women, together.

Kilkka remembers riding the Piccadilly line. They got in that first carriage then, too.