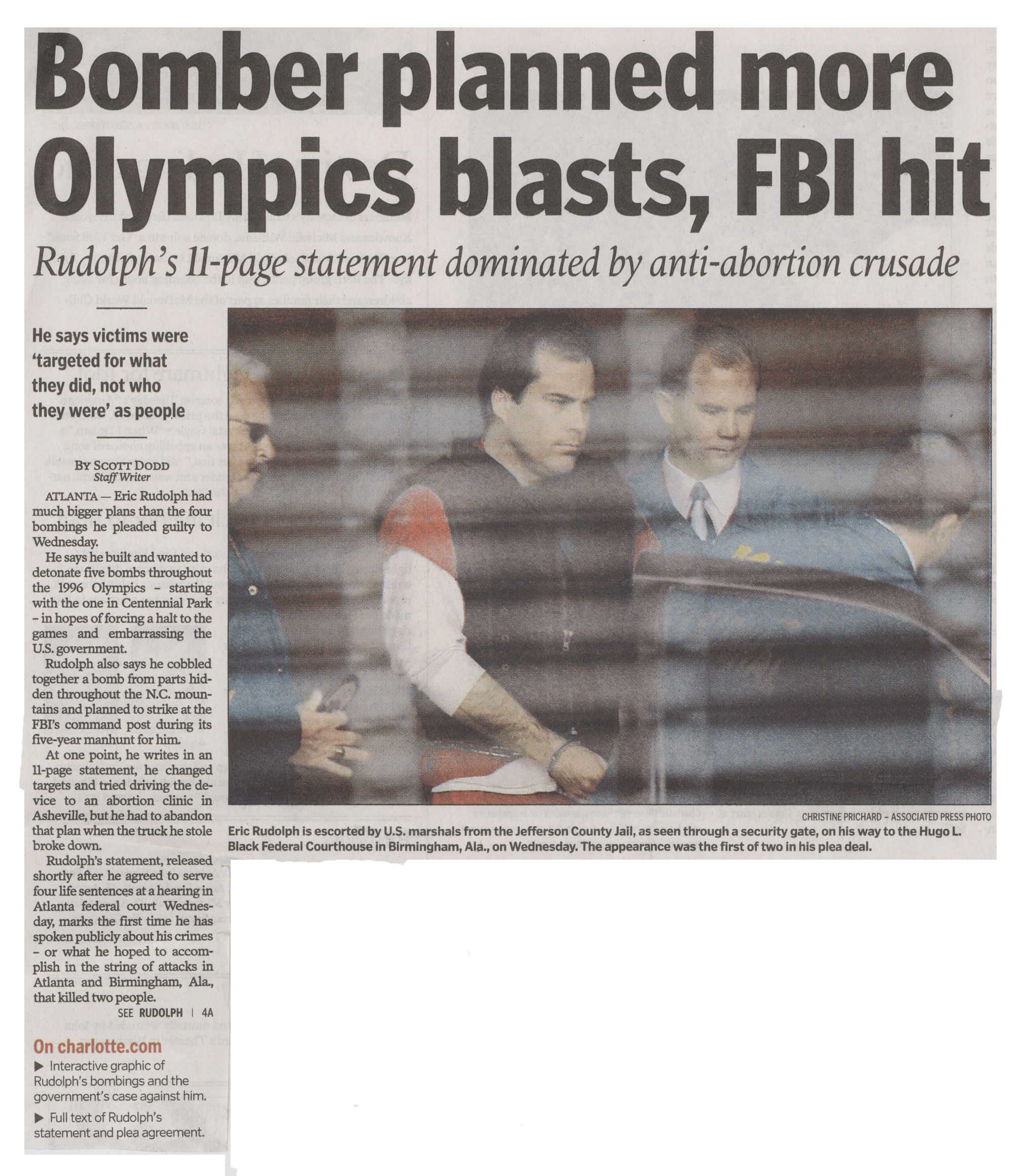 ATLANTA -- Eric Rudolph had much bigger plans than the four bombings he pleaded guilty to Wednesday.

He says he built and wanted to detonate five bombs throughout the 1996 Olympics - starting with the one in Centennial Park -- in hopes of forcing a halt to the games and embarrassing the U.S. government.

Rudolph also says he cobbled together a bomb from parts hidden throughout the N.C. mountains and planned to strike at the FBI's command post during its five-year manhunt for him.

At one point, he writes in an 11-page statement, he changed targets and tried driving the device to an abortion clinic in Asheville, but he had to abandon that plan when the truck he stole broke down.

Rudolph's statement, released shortly after he agreed to serve four life sentences at a hearing in Atlanta federal court Wednesday, marks the first time he has spoken publicly about his crimes -- or what he hoped to accomplish in the string of attacks in Atlanta and Birmingham, Ala., that killed two people.

Prosecutors and investigators had speculated, but, as U.S. Attorney David Nahmias said after the hearing, "It's hard to tell exactly what his motives are."

Nahmias said investigators will study Rudolph's writings, which they hadn't seen before Wednesday, for clues into how a terrorist plans his attacks.

"The rest of the statement," he said, "appears to be hate."

Indeed, according to Rudolph's writings, he hates gay people. He hates abortion. He hates the federal government for failing to outlaw it. He hates the media. He hates President Bush, the Iraq war, the Republican Party, and anyone who agrees with him on abortion but fails to condone his methods.

He claims not to have hated his victims.

"I had nothing personal," Rudolph writes, "against (Emily) Lyons and (Robert) Sanderson" -- the nurse he maimed and the off-duty police officer he killed in a 1998 Birmingham abortion clinic bombing. "They were targeted for what they did, not who they were as individuals."

Similarly, Rudolph claims he abandoned his plan for multiple Olympic bombings after his first blast hurt what he called "innocent civilians." The nail-packed device he planted under a park bench killed Alice Hawthorne of Albany, Ga., and injured 111 others.

That's the only thing Rudolph appears to regret from his campaign of terror. "There is no excuse for this, and I accept full responsibility for the consequences of using this dangerous tactic," he writes, claiming he destroyed his other four bombs on the way back to North Carolina after the first attack went awry.

Rudolph says he had been hoping to kill "only uniformed arms-carrying government personnel" at Olympic park. He writes that he planted the bomb with a 55-minute delay, then called 911, disguising his voice, and was hung up on at first.

He later called back, without the disguise. That's the phone call known to the world: "There is a bomb in Centennial Park. You have 30 minutes."

Prosecutors said Wednesday that 15 people who knew Rudolph had identified his voice on the 911 tape. They also revealed for the first time that they have what appears to be an image of Rudolph, from a videotape shot by a tourist, sitting on the park bench where the bomb was hidden, an hour before it detonated.

Nahmias said investigators will look into whether Rudolph is telling the truth about his first 911 call, but he didn't put much stock in the serial bomber's claims.

"This statement I would consider garbage," Nahmias said.

Even as Rudolph, 38, admits his crimes -- and his inability to carry out even bigger plans, such as knocking out the Atlanta power grid - he remains arrogant and defiant.

"I have deprived the government of its goal of sentencing me to death," he writes, claiming prosecutors sought a plea deal because they were afraid jurors who oppose abortion would be unwilling to convict him.

Rudolph changed tactics and methods after Olympic park, picking more specific targets that signified his hatred of abortion and "Washington's continued tolerance and support for the homosexual political agenda."

When he was identified after the Birmingham bombing, Rudolph says, he "chose the woods" rather than staying to fight the charges in court.

"The next year was a starving time," he writes of his flight in the Western North Carolina mountains where he grew up. "But I am a quick study. I adapted so well, I decided to take the fight to my enemies."

He describes planning attacks on the headquarters of the FBI task force hunting him and assembling a bomb from materials hidden on the Tennessee border. He gave up the location of that bomb in his plea agreement.

Nahmias said investigators believed they knew when and where Rudolph had stolen explosives, so they knew he used very little of his stash in the Atlanta and Birmingham bombings.

Finding the locations of 250 pounds of hidden dynamite was the main thing that led them to a plea deal that spared Rudolph's life, he said.

"You may not appreciate how dangerous that dynamite left in North Carolina was," Nahmias said.

Rudolph says he observed his FBI pursuers for months in 2000, noting their schedules to the minute. He planted his bomb and had picked a day to detonate it.

But in the end, the former soldier says, he couldn't do it. "The agents didn't die that day. Perhaps after watching them for so many months, their individual humanity (shone) through the hated uniform. Underneath their FBI rags, they were essentially fellow countrymen."

Rudolph describes using a small dugout under a rock while hiding out in the woods to avoid heatseeking equipment. One day, he says, a helicopter passed overhead, scanning the ridge.

When it was gone, he climbed out of the icy dirt and said, "I am still here."

On Wednesday, Rudolph's deal with the government he hated so much ensured he'll never go home again.