Dangerous Chase to Save Tangled Whale 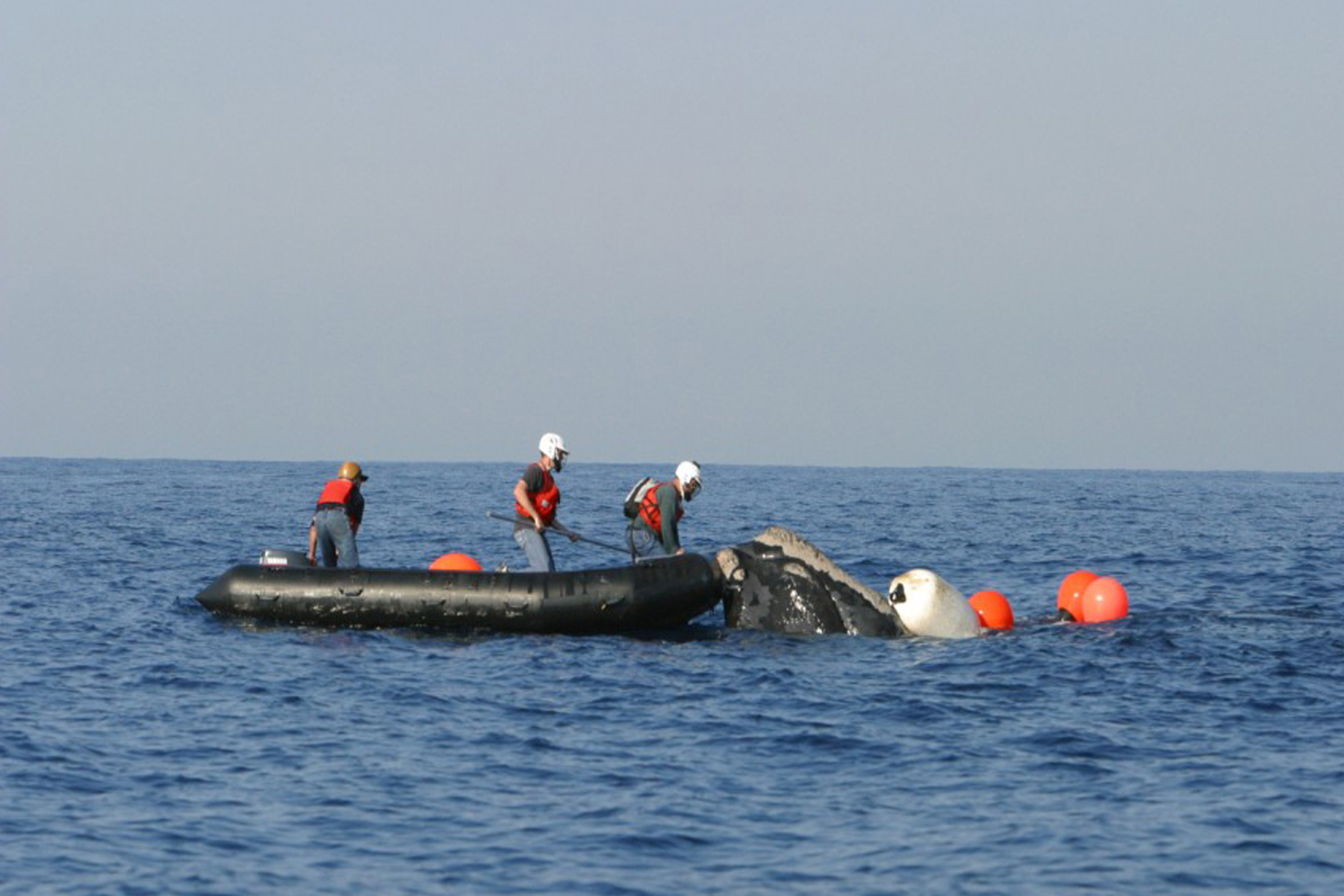 A rare right whale is playing hide-and-seek with a Coast Guard cutter and a team of anxious scientists off the N.C. coast.

The whale is young -- maybe less than a year old -- but this is no game. Thick rope is wrapped around the animal's flippers and across its massive back.

As it grows, that rope could saw into the whale's flesh and kill it. The lines are already cutting through its flippers.

"This is a very difficult case," said Bob Bowman, a veteran tracker from Maine who works with the Atlantic Large Whale Disentanglement Network.

Right whales are very rare. They were hunted nearly to extinction, and scientists think only about 300 are left worldwide.

Their large size and quick travel (it's not unusual for one to swim from New England to Florida in a week or so) make them vulnerable to getting snared in fishing gear strewn along the ocean floor. About three-quarters of living whales show scars from being tangled; an unknown number die every year.

A network of rescuers has grown up along the East Coast, trying to free trapped whales with help from the U.S. Coast Guard and the National Oceanic and Atmospheric Administration's Fisheries Service.

In March 2004, the team tracked a tangled young right whale named "Kingfisher" off the Carolinas' coast. His plight was followed nationwide, with regular updates on CNN and NBC's "Today" show.

Kingfisher zoomed off into the deep ocean, and the team had to give up. But a year ago, they managed to free a tangled right whale named "Yellowfin" off the coast of South Carolina.

The latest whale doesn't have a nickname yet (Kingfisher and Yellowfin were named after the Coast Guard boats chasing them). Scientists don't know whether it's male or female, but it's about 35 feet long and is probably either a calf or yearling.

It still has 10 to 15 feet to grow in length -- and a lot more in girth and mass. That's why the lines are so troubling.

Georgia wildlife officials spotted the whale Dec. 3 during an aerial survey, and a crew managed to attach a tracking buoy to the trailing rope, which stretched about 400 feet. On Dec. 5 off the coast of Florida, rescuers managed to cut the trailing gear down to about 75 feet. The weather kept scientists from making another attempt until Monday.

An eight-person team left Sunday night from the Fort Macon Coast Guard Station in Morehead City, aboard the Elm, a 225-foot cutter.

They hoped to reach the whale around sunup, but it had already swum northeast of Cape Hatteras. It took until noon to chase down their quarry.

They approached in a smaller aluminum craft and an inflatable Zodiac, using long hooks and cutting tools to try to remove some of the ropes while avoiding the whale's thrashing tail. But they didn't have much luck.

The whale could stay near the coast, giving them another chance, or it could swim off like Kingfisher. If it leaves, though, there's still hope.

Scientists were pretty sure Kingfisher wouldn't survive. They lost track of him when a fishing boat ran over his telemetry buoy. But this year, he was spotted again and spent the summer off the coast of Maine.

"This is an animal that was going downhill fast," Bowman told the Observer. "No one expected to see him again."

One flipper was still tangled, but many of the other ropes were gone. "He looked 100 percent better," Bowman said.

Kingfisher's secret? No one's sure. Rescuers did make cuts in some of the ropes. Maybe it was enough for him to fight free.

"We like to think that we helped," Bowman said. "The truth is, we really don't know."

Chalk it up to just another mystery of the deep.