From Tailgate to Tail End, It's All Thrills 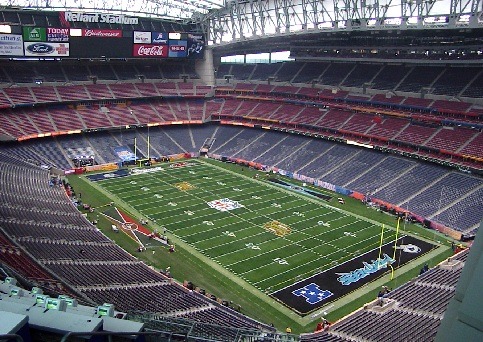 It is 1 p.m., a breezy Houston afternoon. Four hours, 25 minutes until the Super Bowl. Inside Reliant Stadium, vendors practice their calls in the pregame quiet.

Outside, the gates open.

Jane Adkins and her son, Eddie, are among the first who can't wait to head into the stadium. They are from Charlotte, and they have been permanent seat license owners since the Panthers first became the Panthers.

"I pulled into the parking lot," Eddie says, "and that was when I thought, `I am actually watching my team in the Super Bowl.' "

It will be that kind of day for Panthers fans - a day of belief and disbelief, joy and anxiety, and finally disappointment. At this point, they don't know that. They only know this is the last day of a season they never imagined would come.

"Are we here?" says Charlotte's Jae McGuirt. "Are we really here?"

He's surrounded by 50 other black-and-blue crazies who defied the NFL's tailgating ban. They found space in a hotel parking lot within screaming distance of Reliant Stadium.

But once they pull themselves away from their tailgate and enter the stadium, the Pools and their friends, the Tighes, find their end zone club section dominated by Patriots fans.

"Here they come!" Kristie Tighe yells as the Panthers run on the field to fireworks - and the boos of Patriots fans in their section.

"We're just going to have to pump up the volume," Tighe says.

Nobody's hurting more for Jake Delhomme right now than his friends from Breaux Bridge, La. Three couples came together to watch their buddy lead his team in the Super Bowl.

"It's priceless just to be here," says Cher Soignier. Her husband, Brian, was Delhomme's backup and roommate at Louisiana-Lafayette.

So far, it's not going well in this scoreless game. Two sacks already, and the Panthers can't get the running game going. Delhomme is hit hard a third time, and he coughs up a fumble that gives the Patriots a short touchdown drive.

The Breaux Bridge crew is stony-faced.

"They need a friggin' score," Soignier says, rubbing his chin. "But you gotta be patient. They've been put in this situation before and come out of it."

The very next drive, Delhomme throws some dazzling completions, ending in a touchdown pass to Steve Smith.

"He has something inside of him," Soignier says. "You see it on his face."

Erik Francis and Piers Clarkson serve an important role at Carolina games. They're the fans you point to as crazier than you are.

They are dressed as they always are for games -- in Panthers jerseys with silver spikes jutting out of their shoulder pads. In the concourse behind section 646, they stop for pictures with Carolina -- and New England -- fans.

"Lots of guys like to have our picture taken with their wives," says Francis, who like Clarkson is from Winston-Salem.

Now, with the Panthers trailing 14-10, they're also a source of support for fretted fans. "I think we've got a game," Francis says to one. Another stops by. Picture, please?

Francis and Clarkson strike a pose. Smiles all around.

Tim Reavis has the worst seats in the house.

Seriously, the worst. They're in the corner of the end zone. On the 700 level.

Reliant Stadium doesn't have a 700 level.

The NFL brought in directors' chairs and set them up behind the top section of seats, presumably so it could sell an extra ring of tickets at $400 each. Reavis and his buddy Mike Orr got two in the Panthers' PSL lottery.

"We drove down from Charlotte kidding that we're gonna be in the last row," he says. Turns out, it wasn't a joke.

Reavis can see a third of the field at best. None of it when the folks in front of him are standing. And they were standing a lot during the exciting second half.

"It's killing me," Reavis says. "I mean, for a PSL owner to be treated this way? The NFL did wrong."

Section 350, all Panthers fans, is more blue than black as the clock winds down. The Panthers trail 21-16.

Charlotte's Mike Durkee has been on his feet all game, exhorting his section mates even during the low moments. This is one of them.

The Patriots are driving. Then, a Carolina interception. Then, an 85-yard score from Delhomme to Muhsin Muhammad.

"This has been it all year," Durkee says. "My dad and I have been watching all season, just dying. And they keep pulling it off."

Dori Stoneman of Greensboro swings her rally towel when Ricky Proehl catches a touchdown pass to tie the game at 29.

Quickly, the Patriots are driving.

But, she says: "All year long it has been like this. I love it."