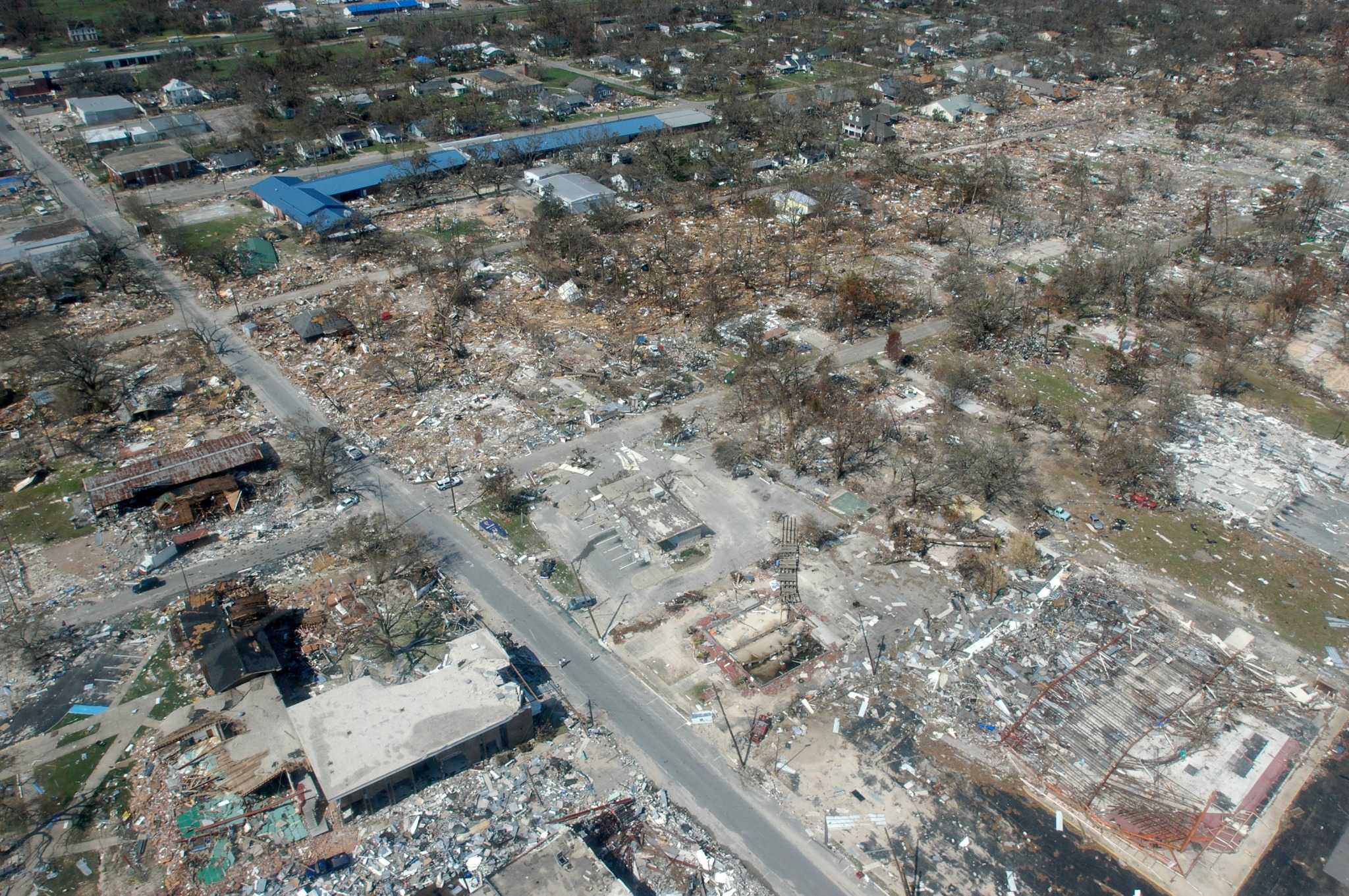 The Sun Herald's coverage of Hurricane Katrina was awarded a 2006 Pulitzer Prize for public service.

BILOXI -- The Gulf Coast woke this morning to devastation not seen since Camille 36 years ago. Hurricane Katrina, a massive Category 4 storm, trashed entire cities and left hundreds missing or dead.

"This," said Biloxi Mayor A.J. Holloway, "is our tsunami."

Rescuers in boats and helicopters searched for survivors of Katrina and brought victims, wet and bedraggled, to shelters Tuesday as the extent of the damage across the Gulf Coast became ever clearer.

Power was out to about 800,000 customers statewide, according to officials of electric companies and rural power associations. Gov. Haley Barbour said on TV this morning that the death toll in Harrison might be as high as 80.

Many died on Point Cadet, at the southeastern tip of Biloxi's peninsula, officials said. Bodies were being recovered late into the night, and a portable morgue was being brought in to handle the dead.

Authorities feared some may have been washed away, never to be found.

"We'll be trying to determine a total fatality count," weary Assistant Police Chief Rodney McGilvary said early this morning, "if we ever have one."

Mississippi fared so badly because it stood east of Katrina's eyewall, in the segment of the storm that packs the most powerful gusts and raging waves.

With phones out, power gone and roads demolished, even emergency officials could get only a rough look at the devastation.

But it was clear as the sun came up today that southern Mississippi had suffered billions of dollars in damage and would take months, if not years, to recover.

Katrina's tidal surge -- over 30 feet in spots -- demolished major bridges to three coastal counties, including those linking Biloxi with Ocean Springs and the connection to Bay St. Louis.

The storm swept sailboats onto city streets in Gulfport and obliterated hundreds of waterfront homes, businesses, community landmarks and condominiums. The concrete Eight Flags display marking the Gulfport-Biloxi boundary -- a signature of both coastal communities -- was gone.

Hancock and Jackson counties fared no better. A foot of water swamped the emergency operations center at the Hancock County courthouse -- which sits 30 feet above sea level.

The back of the courthouse collapsed under the onslaught.

Jackson County's emergency operations center also disintegrated as Katrina raged ashore. The roof was peeling off by 7:30 a.m., forcing officials to evacuate to the courthouse across the street.

Hundreds of Katrina's victims needed medical attention, but it was hard to give. Cirillo said three local hospitals could accept only the worst emergency patients, so officials set up medical triage stations at the Biloxi High School, a fire station on Pass Road and other spots. They urged the walking wounded to go there.

Memorial Hospital suffered some damage, but no injuries to patients or staff. It and Biloxi Regional had the only functional emergency rooms in Harrison County. Cirillo said they had seen lots of cuts, broken bones, electrocution from downed
power lines and breathing difficulties from the stifling heat.

Looting was already a major problem as the wind subsided and darkness fell Monday. A furious Harrison County Sheriff George Payne was heard on the police scanner telling his deputies to make room in the jail for thieves.

They scoured broken homes and businesses for cars, radios, liquor, furniture, generators and anything else they could find.

Georgia, Alabama, Texas and Florida sent 35 ambulances to help, more than doubling American Medical Response's normal fleet of 32 -- seven of which were lost in the storm.

Katrina will forever be compared to Hurricane Camille, the powerful Aug. 17, 1969, storm that cost the Mississippi Coast 144 lives and more than $6.5 billion in property damage in today's dollars.

A revitalized and growing Mississippi Coast had even more to lose. In Biloxi, the mayor said, the storm's surge put at least five casinos out of commission.

In Gulfport, the Copa Casino barge sat on land next to the Grand Casino parking garage. The western Grand Casino barge, containing Kid's Quest, was swept around the west side of the hotel and now blocks U.S. 90.

Katrina shattered high-water marks set by Camille, pushing surf, sand and debris higher than anyone alive today can remember. In Gulfport, water washed over the CSX railroad tracks, a line old-timers say Camille did not cross.

U.S. 90, the main road through all the coast's oceanfront communities, was buried under inches and even feet of sand in some sections, leaving questions about how the region's road network will recover.

"Highway 90 is destroyed, " said Holloway, Biloxi's mayor. "I saw a disaster. Water did not get this high for Camille."

Stories of narrow survival were everywhere. Jean Jenkins of Moss Point spent nearly seven hours crouched in her small attic with her husband, two dogs and a cat before her son-in-law could rescue her.

He had to come by boat.

Jenkins said she's lived in her house for 29 years. She didn't evacuate because she'd never seen the water rise so high.

Monday morning, it came in fast and furious as Katrina raged ashore, giving Jenkins and her husband no escape but the attic.

When she finally embraced her daughter after the long ordeal, Jenkins said she'd lost everything. "We've got nothing left."

In neighborhoods throughout Biloxi and Gulfport, shell-shocked residents burst into tears and embraced, consoling one another over the devastation. Brothers Jesus and David Diaz walked up Biloxi's St. Charles Avenue in a daze.

"What are you looking for?" they were asked.

One brother replied: "Our house." Like many others, they may never find it again.