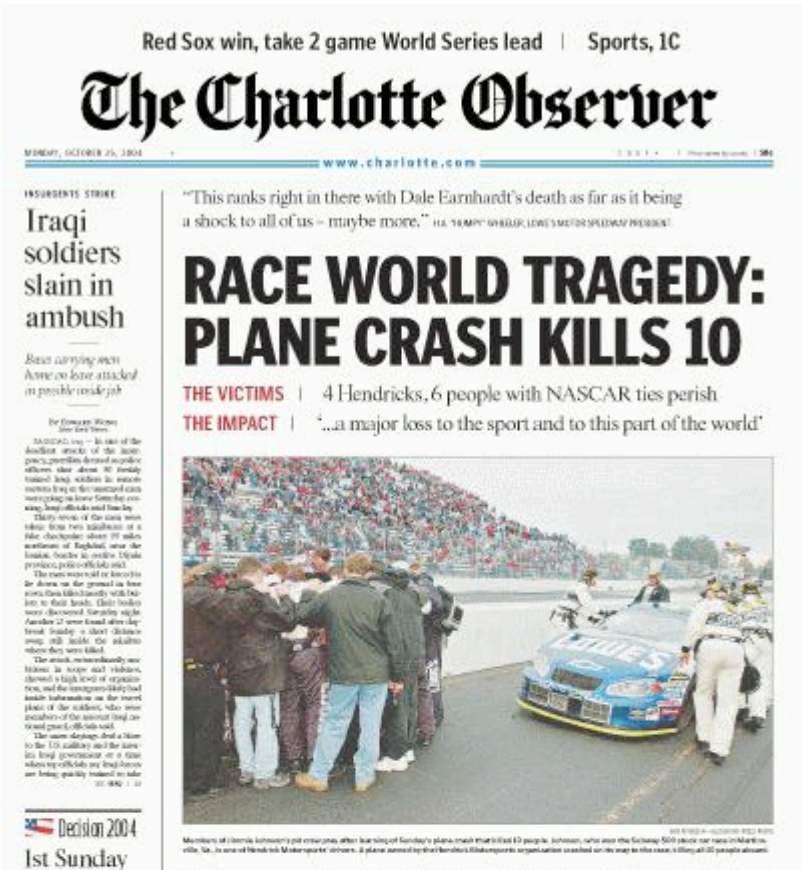 One of racing's royal families lost three top leaders and its heir apparent when a plane carrying 10 people from Concord to a race in Martinsville, Va., slammed into a remote mountainside Sunday near the Blue Ridge Parkway.

Everyone aboard the Hendrick Motorsports plane died in the crash, just hours before one of the team's top drivers battled to his sixth win of the season. Race team officials told Jimmie Johnson as he headed to Victory Lane.

"It's probably the worst tragedy that's ever happened in motorsports," said Charlotte-based sports marketing expert Max Muhleman, a business collaborator and friend of the Hendrick family for two decades. "It's an almost unimaginably tragic thing."

Team owner Rick Hendrick, a Charlotte businessman who built one of racing's most successful empires, was not on board. He usually flies to races but stayed home Sunday. He had been ill.

Hendrick lost his son, Ricky, a driver who retired with a shoulder injury two years ago and was being groomed to take over the business; his brother John, president of the Hendrick pilots Dick Tracy and Liz Morrison were flying the King Air 200 turboprop, one of several company-owned planes based at Concord Regional Airport.

The other passengers on the flight were Scott Lathram, a helicopter pilot for NASCAR driver Tony Stewart who was scheduled to ship out to Iraq next week with the Army Reserves; and Joe Jackson, a Dupont employee and sponsorship representative for driver Jeff Gordon's No. 24 car.

The Hendricks were close, Muhleman said, and ran their company like an extension of the family tree, with relatives at all levels of the organization. John stepped in for his brother as head of the company when Rick Hendrick suffered from leukemia and legal troubles. And one of John's daughters, Jennifer, had recently started in the Hendrick marketing department.

"They are the classic American family," Muhleman said. "All for one, one for all. Whatever we do, we do together."

The plane carrying them to Sunday's Subway 500 took off from Concord around noon for the 25-minute flight to Martinsville. It crashed into Bull Mountain, seven miles west of the airport, about 12:30 p.m., said FAA spokeswoman Arlene Murray.

Crews could only reach the crash site by all-terrain vehicles and were surveying the wreckage late Sunday. The National Transportation Safety Board planned to begin investigating this morning.

Bull Mountain is known for its steep and rugged terrain, and that section of the Blue Ridge Mountains had been fogged in all day, said Jenny Gooden, a Patrick County rescue captain.

Another small plane hit the mountain in November 2000, killing the pilot. And a local funeral home director said a U.S. military bomber crashed into Bull Mountain in the 1930s or 1940s. Its parts still litter the slopes, he said.

NASCAR driver Rusty Wallace, who is also a pilot, told reporters after the Subway 500 that he considers flying into Martinsville risky.

"Talladega and this place are the two most dangerous approaches on the circuit," Wallace said, according to the Associated Press. "We all feel like we have professional aviation groups, but obviously something went majorly wrong."

Rescue crews didn't actually reach the wreckage of the Hendrick plane until nearly six hours after it disappeared. Two Patrick Springs volunteer firefighters had been working hayfields in the area and heard a boom nearby, said Jamie Clark, a county paramedic.

The Virginia state police tried to send a helicopter to search for the wreckage, but it couldn't go up because of the fog. About 2:30 p.m., state police managed to detect the signal from the plane's emergency transmitter. Police and volunteers on ATVs eventually found the plane's scattered remnants.

NTSB spokesman Keith Holloway said investigators at the site today would try to determine whether the Hendrick plane had a ground proximity warning system, a radar device that alerts pilots when they fly too close to mountains or other terrain.

Such a system might have prevented the crash, aviation consultant Bart Crotty said. Commercial airlines have them, but they aren't required on private planes.

A commuter plane that crashed as it approached a northeastern Missouri airport Oct. 19, killing 13 of the 15 people aboard, lacked an updated version of the warning system, investigators said.

The Hendrick plane that crashed Sunday was built in 1981 by Raytheon Aircraft, and would not have been equipped with a ground proximity warning system when it was new, according to Tim Travis, a spokesman for the Wichita, Kan.-based company. Whether such a device was added later is unclear.

Studies have shown that the accident rate for Beech King Air 200s and B200s is lower than for turboprops overall, Raytheon Aircraft says.

Raytheon's King Air planes are among the most popular turboprops for private business travel. They're used frequently by the military for border patrols and surveillance, and are commonly flown by NASCAR teams.

Many teams are moving away from the turboprops, however, to larger and faster Gulfstream jets, said Lowe's Motor Speedway spokesman Jerry Gappens. Hendrick has Gulfstreams, as well, Gappens said, and only uses the King Air for shorter flights.

NASCAR officials learned that the Hendrick organization's plane had disappeared during the Subway 500 but didn't tell Hendrick drivers until it had ended.

Johnson celebrated his victory -- which shot him from eighth to fourth in the Nextel Cup points standings -- by spinning his tires in Turn 4. As he got out of his car, officials from his team met him and led him away from the track, telling him what had happened.

Hendrick crew members huddled together in a circle and prayed. There was no postrace celebration in Victory Lane.

Many in the Martinsville crowd learned about the crash when NASCAR spokesman Jim Hunter was interviewed on a live network radio broadcast, which was carried over the track's public address system.

NASCAR as a sport has been hit by numerous tragedies both on and off the track. It lost its biggest star, driver Dale Earnhardt, three years ago on the last lap of the Daytona 500.

Some of the sport's leaders said this accident will affect everyone at the top levels of the tight-knit NASCAR community.

"It'll be tough to get over this one," said Lowe's Motor Speedway President H.A. "Humpy" Wheeler. "These are the people we are face to face with, every day. We saw them all the time. We ate with them, we traveled with them. Now they're gone."

Two other people were nearly aboard the plane Sunday. John Bickford, Jeff Gordon's stepfather and director of the driver's operations, was also sick and didn't go.

"We're all a family, literally a family," Bickford said.

Jack Stark, the psychologist for Hendrick Motorsports, told the Omaha World-Herald he had planned to fly with the group to Martinsville. But he changed his mind and stayed in Omaha to work at a hockey game.

Rick Hendrick is one of the nation's largest car dealers and owns the racing teams of Johnson, Gordon, Terry Labonte and Brian Vickers. His company employs more than 400 people at its motorsports compound near Lowe's Motor Speedway in Concord. It includes race shops and a 15,000-square-foot museum.

"The whole thing is a major loss to the sport and to this part of the world," said Bruton Smith, CEO of Speedway Motorsports Inc. and auto-dealership chain Sonic Automotive Inc. "It'll take a major regrouping."

Hendrick Motorsports' private fleet has been based at Concord Regional Airport for five years. The company recently signed a deal with the city for a new hangar, which Hendrick will lease for $25,000 a month.

Hendrick would often send his planes to help others in racing.

When Blaise Alexander was killed after hitting a wall at Lowe's Motor Speedway in 2001, a Hendrick plane flew Alexander's family home to Pennsylvania. As the plane was returning to Charlotte, the pilot realized Alexander's dad had left his briefcase, so he turned around and delivered it.

At Hendrick's race shop near the speedway in Concord, workers hung a tarp over the sign out front Sunday to make it harder to find, but TV news vans still parked along the roadway.

A sheriff's deputy blocked off the entrance as Hendrick employees gathered in the parking lot, hugging and talking on cell phones. Late Sunday, they held an impromptu prayer service.

About 6 p.m., a car pulled up to the entrance. The driver handed a bouquet of flowers to the sheriff's deputy and drove away.