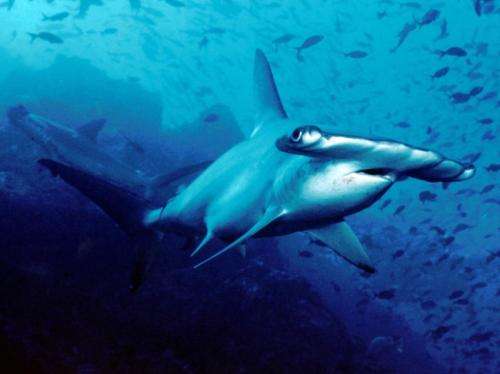 There's a new shark lurking at the coast.

It's a hammerhead, and it appears to be a homebody. So far, it's mainly been found in the waters of South Carolina.

So it's fitting that a University of South Carolina scientist got the honor of discovering it. Joe Quattro, a biology professor, says the shark is the ninth member of the hammerhead family.

The newbie looks just like a scalloped hammerhead on the outside, but Quattro and colleagues discovered that it has different genetic markers -- enough to consider it a distinct species.

It also has fewer vertebrae in its backbone, the only physical difference they've identified.

The new guy doesn't have a name of its own yet, so it'll be called the "cryptic species" until a proper scientific designation is given. Quattro and his colleagues will get to help with that.

"When we write the paper, we'll probably just put in a bunch of X's and then go back and fill in the name later," he said.

Hopefully, the new shark will last that long. Many Atlantic shark species -- including scalloped hammerheads -- have declined sharply in recent decades due to overfishing.

Because the new species appears much rarer, and appears to be born and live largely in Bull's Bay and St. Helena's Sound near Charleston, it's even more at risk, Quattro said.

"You've got to really think about how you manage those estuaries," he said, "because it's really critical to those species."

Scientists have known for a long time that sharks love to give birth in the shallow bays and briny river deltas along the S.C. coast. The water is teeming with shrimp and fish and relatively free of predators, giving the juvenile eating machines time to feed and grow until they're ready to brave the open ocean.

Glenn Ulrich, a researcher with the S.C. Department of Natural Resources, has caught thousands of shark "pups" in those waters, punching bright blue plastic tags through their fins for tracking purposes.

In 2000 and 2001, he caught a lot of scalloped hammerheads, and gave some of the samples to Quattro for testing. That's when Quattro and his colleagues noticed the genetic differences.

At first, Quattro suspected mislabeling. But after testing hundreds of samples, the evidence convinced him they had found something new prowling the S.C. waters.

They published their findings in the journal Marine Biology.

"It's kind of a cool detective story," Quattro said. "I was proud of the science."

The next step is an expedition this summer to tag members of the species in their pupping grounds to learn more about their life span and migration. Quattro is hoping to find a way to distinguish them from other hammerheads -- other than genetics or counting vertebrae -- so scientists can tell the difference quickly when they're caught.

"Something you can do with a tape measure would be nice," he said.