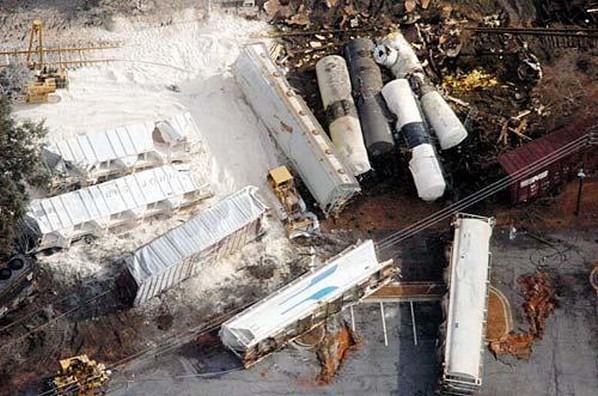 AIKEN, S.C. -- After a deadly train crash forced thousands of Graniteville residents from their homes, Norfolk Southern Railroad took over a church in this neighboring town to hand out checks, helping hundreds of grateful victims cover everything from food to hotels to lost wages.

But when they turned the checks over, the victims found a printed statement that made many afraid to cash them.

Endorsing the check, the writing says, "constitutes a full, final and complete release of all claims growing out of" Thursday's accident, which spread a toxic chlorine cloud that killed nine people and injured hundreds.

"They're trying to play us for a bunch of dumba--es," said James Gay, who says he's suffering from chemical bronchitis after breathing toxic fumes from the freight train, which crashed near the mill where he works.

On Saturday, victims of the crash met a hodgepodge of legal advice everywhere they went, from the Shoney's -- where the railroad provided free food -- to the middle of the street. Lawyers lingered outside the church, warning about the release statement, while the S.C. attorney general said he believes the checks are safe to cash.

Norfolk Southern officials said they aren't trying to take away anyone's right to future compensation. They issued a statement saying the release on the back of the expense checks is only meant to refer to current expenses -- not stop victims from seeking future assistance, or even suing.

But it sure seemed that way to Gay and others, who left their homes and workplaces Thursday morning with burning eyes, raw throats and even chemical burns.

"If it don't mean (anything), why waste time writing it?" Gay said. "I'm not going to cash that check."

Norfolk Southern officials said they're not trying to create more stress for people who've already suffered. The statement they issued Friday is meant to reassure victims it's OK to cash the checks without waiving their rights, a spokesman said.

Regional Claims Manager Rob Fender said the railroad wrote second checks for some evacuees Saturday, even though they had already filed claims Friday and signed the release statement.

"They can continue coming in to us as they accrue expenses," Fender said. " This is no legal maneuver."

But the company couldn't explain why the language is on the expense checks -- complete with the date and place of the accident filled in by hand -- if it isn't meant to ward off future legal claims.

"They came down with a box of checks, and all the checks have that printed on the back of them," company spokesman Robin Chapman said. "I cannot give you the legal reason for it."

He said release statements have been included on checks the railroad has handed out after past accidents.

North Dakota Attorney General Wayne Stenehjem stepped in, getting Canadian Pacific to remove the release statement. He said it could be used to try to block future lawsuits.

Jim Burnett, former chairman of the National Transportation Safety Board, also an attorney, said he'd be suspicious of a check that included a release statement.

"It's there in writing, and it's there for a purpose," Burnett said. "As an attorney, you discourage people from signing a statement that might be construed as giving up your legal rights."

But the office of S.C. Attorney General Henry McMaster said it isn't concerned about what's on the back of Norfolk Southern's checks, because the company has already said the language wouldn't preclude a victim from seeking future compensation.

"Norfolk Southern has publicly admitted such, and that would pretty tightly box them in in a court of law," said spokesman Trey Walker. "Any judge worth his salt is going to hold them to that."

Other legal experts say the release statement probably wouldn't be legally binding - which makes it all the more confusing that Norfolk Southern would make people sign it.

"If you do something that makes you look worse and isn't legally enforceable, what's the business sense?" said David Linnan, a University of South Carolina law professor who specializes in business and international law.

Despite the confusion, cars clogged the streets of downtown Aiken on Saturday as hundreds of people lined up to make a claim. Norfolk Southern said it issued 500 checks Friday and probably more Saturday. The company said it didn't know how much money it had paid so far.

The wide, grassy median across from the church became a tree-covered law office as attorneys and their representatives answered questions about the checks. Some advised victims not to sign or cash them.

The S.C. Bar Association issued a news release warning that lawyers aren't allowed to solicit clients until 30 days after the accident. But some victims said they needed legal advice now.

Gay, the mill employee who says he has chemical bronchitis, stopped to talk with David Maynard, an investigator for a Virginia law firm.

Wearing a crisp white shirt, dark pants and a tie, Maynard told Gay that if he's worried about the language on the check, he should ask Norfolk Southern claims reps to get rid of it.

"Their job is to save that company money," Maynard said, pointing toward the railroad's crisis center. "Ask them to cross it out and initial it."

Other victims went ahead and cashed their checks Saturday, even with their worries. Many have no homes, no cars, no clothes -- not even shoes.

Ricardo Mack and Kevin Robinson both work for Avondale Mills, which has been shut down since the wreck. Mack, his wife and 18-month-old son had to leave their home near the train tracks.

Robinson tried to discourage Mack from cashing a check he got at the claims office, but Mack said he had to. "I ain't go no clothes. My baby ain't got no clothes."

He just hopes Norfolk Southern is being straight with them.